First formulated in 1929 and Dettol soon found a place in the home, in addition to being used in hospitals and by doctors. Today, we are a world leading hygiene brand trusted by millions.

It all began with an innate instinct to protect

We all have an inherent nature to protect our loved ones. Whether it’s to protect our families, friends, or even the strangers in our communities - keeping people hygienic is at the forefront of our minds. But no matter who you are, the question from all sides has always been how can I most effectively protect those I care about?

In the early 19th century, it was believed disease was caused by the imbalance of the body. Dettol took pride in progressive science that represented a new way of thinking - that disease was caused by germs we contract throughout our daily activities in life. It was later discovered that millions of illnesses can be prevented through effective hygiene practices.

Fuelled by this biological instinct to help protect society and utilise our scientific expertise, Dettol embarked on a mission to create a healthier, cleaner & safer world. We began formulating high quality and efficacious products with that mission in mind. In turn, the concept of a sword (to kill harmful germs) and shield (to protect our communities) was born. Years later, we still champion this ideology and became the global hygiene leader we are today.

First formulated in 1929, Dettol is the child of Albert Leopold Reckitt & Dr. William Colebrook Reynolds. It was first used for personal use, as a douching formulation for females and washing hands. Used in hospitals and by doctors, in 1933 a maternity (gynaecological and obstetric) study demonstrated that Dettol was effective in washing hands and helping o reduce illness causing bacteria and viruses. From then, it was used in hospitals and by doctors and has since evolved into the product we trust today.

Dettol was brought to people around the world in the form of antiseptic liquid, also recognised as one of our most iconic products to date. 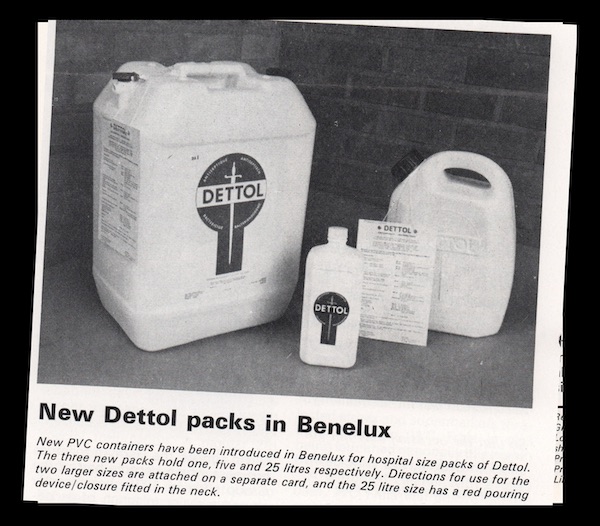 First sold over the counter in UK pharmacies

Dettol Becomes A Pioneer In Health & Hygiene Through Innovation

We didn’t want our fight against germs to end at disinfecting medical supplies and treating cuts and wounds. Hands, surfaces and clothes are also breeding grounds for bacteria that can make people sick. In 1979, Dettol began to further expand its technology, know-how, and resources to further introduce new formats to help protect more people and more places around the world in really powerful ways. And... we haven’t stopped innovating since.

As Dettol continued to grow and deliver its promise for protection, it became more loved  by millions of people in over 124 countries.

The fact is, although Dettol and our protector community have improved health & hygiene affairs globally, we still have more battles we need to fight for a better world.

We strive to continue to protect against germs each and every moment. No matter who you are or where you’re from. We are in this together, let’s all fight for a healthier and happier world.

Cleaning lowers the risk of germs spreading, but still leaves some germs behind?